Since the formation of our parish 60 years ago, 24 Vicars and 5 Asst. Vicars have served in our parish. We take this opportunity to express our sincere gratitude to all our past Vicars and Asst. Vicars for their inspiring leadership and valuable services. Our present Vicar, Rev. Mathai Joseph along with his family joined us on 1st May, 2012. He plays a motivating role in all activities of the parish. 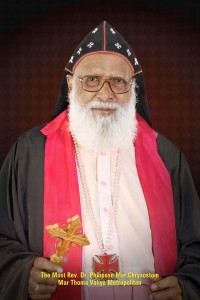 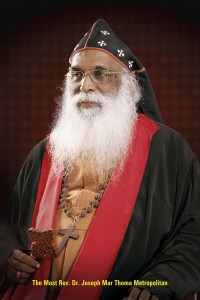 His Grace The Most Rev. Dr. Joseph Mar Thoma Metropolitan 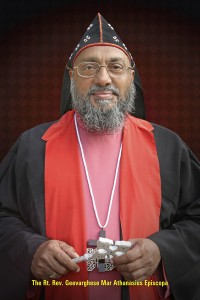 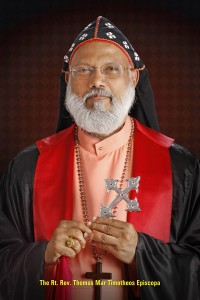 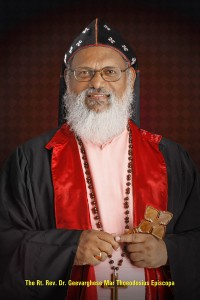 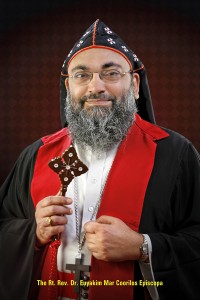 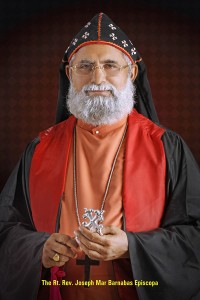 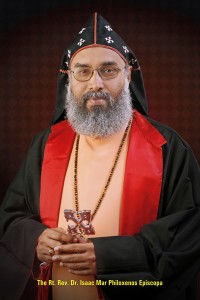 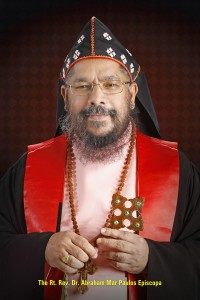 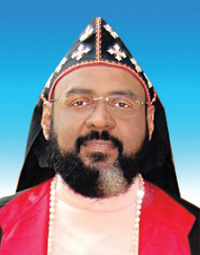 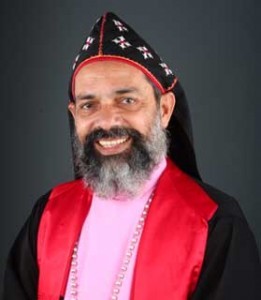 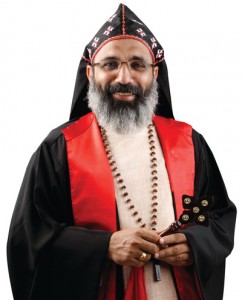 Clergy from our Parish

We are happy to mention that our parish has contributed five ‘Achens’ to Mar Thoma Sabha and they are in the active Ministry in different capacities. 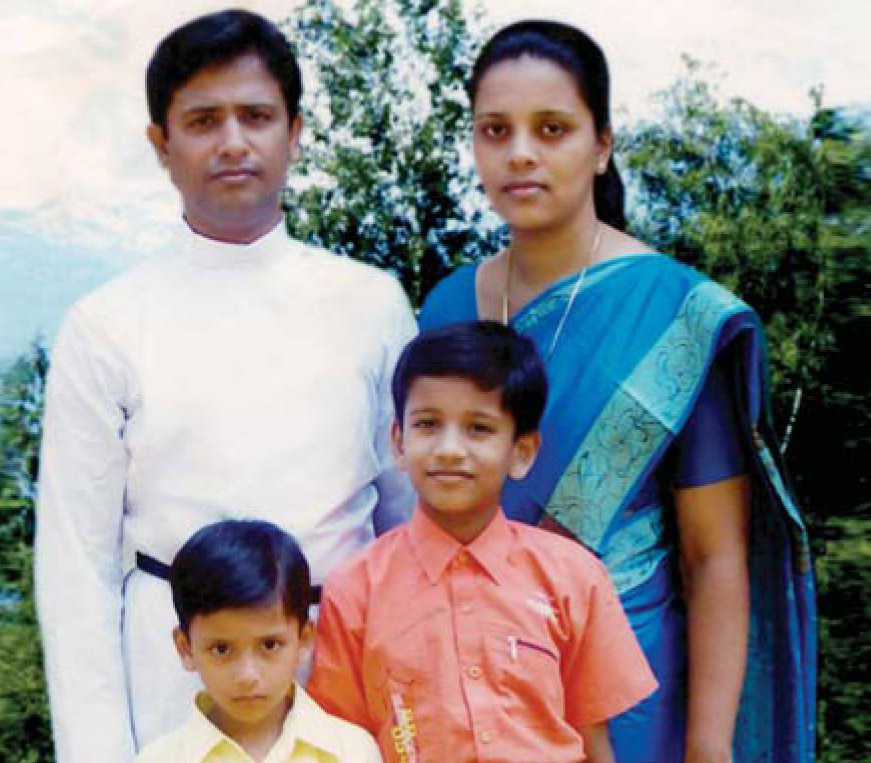 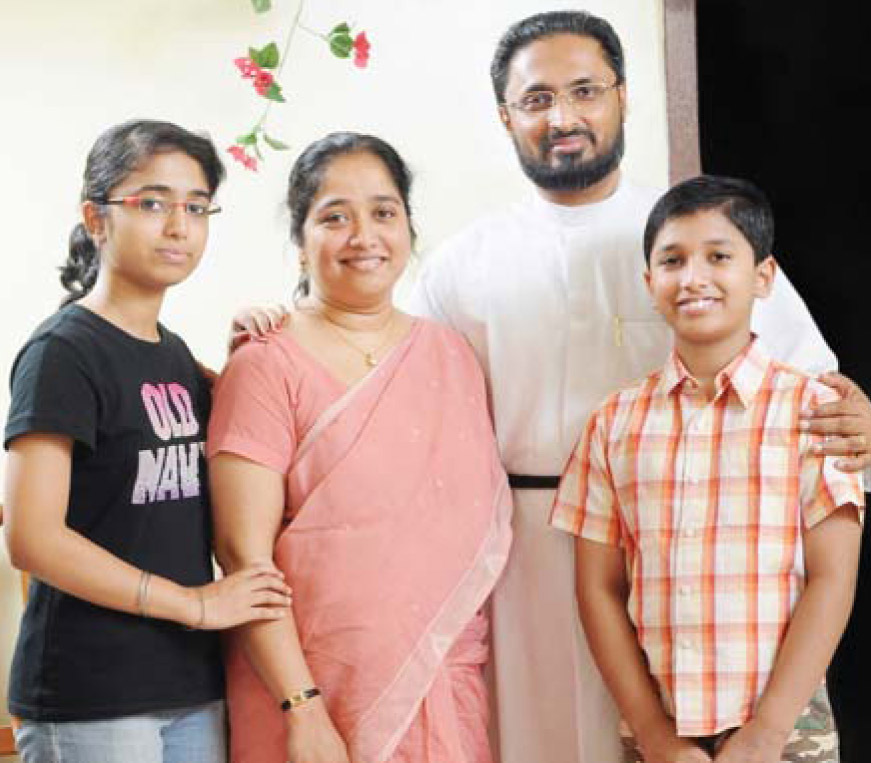 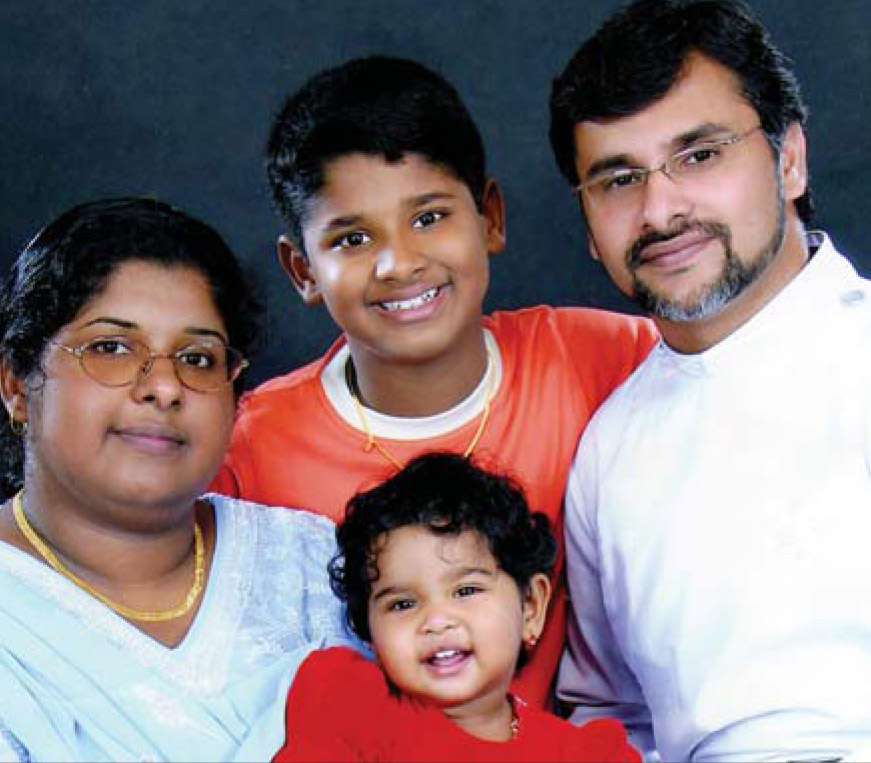 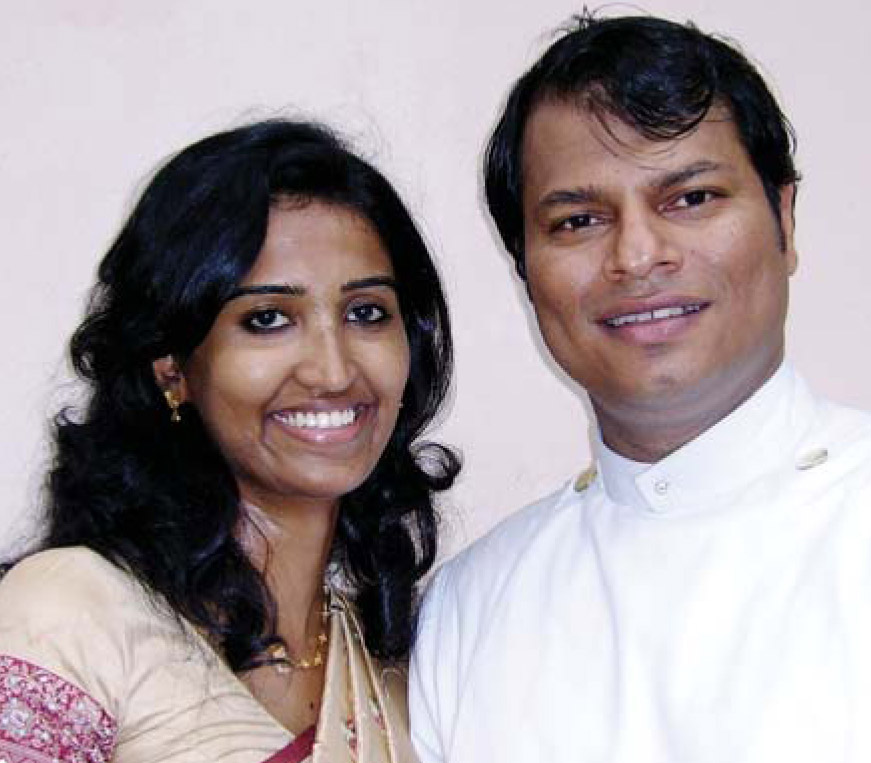 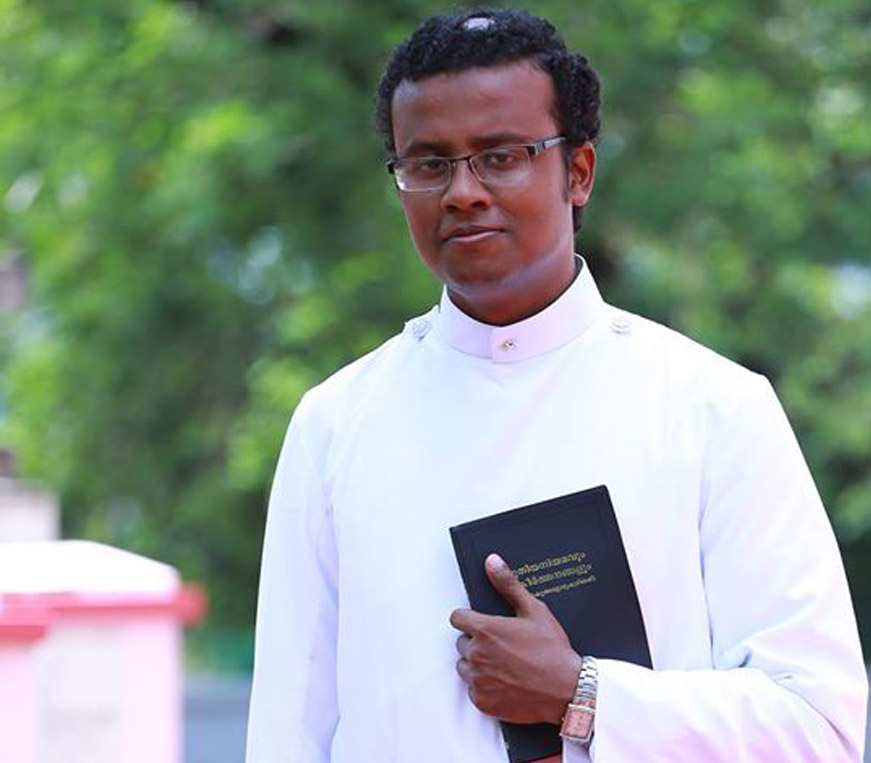 We pray to Almighty God to give them heavenly wisdom and strength in ministering His vineyard.

Malankara Mar Thoma Syrian Church (Malankara Mar Thoma Suriyani Sabha as it is called in native Malayalam) is one of the oldest groups of practising Christians in the world. Believed to be followers of one of the original disciples of Jesus Christ – St. Thomas (also called Didimus or Thomas, the doubter). It is widely believed that the Apostle St. Thomas came to Muziris on the south west coast of India in AD 52 and laid the foundations of Christianity in this part of the world.

Kalyan Mar Thoma Church is one of the outside Kerala parishes of the Mar Thoma Syrian Church of Malabar with its Head Quarters at Tiruvalla, Kerala. During the period 1930-40, many Syrian Christian members including Marthomites who came to Mumbai from Kerala, started prayer groups/congregational worships and by their relentless efforts a Mar Thoma parish was set up in Mumbai in November 1940, the present Mumbai/Dadar Mar Thoma parish. It was the first and only Mar Thoma Parish covering the whole of Mumbai city and suburbs including Kalyan. The place of worship was the Holy Redeemer Anglican Church, Dadar. Due to the difficulties in attending services and fellowship gatherings at distant Mumbai, a few Marthomites staying in and around Kalyan, formed a prayer cell here in Kalyan, and the first prayer meeting was held on 28th Dec, 1950 at Karnik Road, along with some members of other Christian denominations. In due course, a representation was submitted to the Metropolitan on 12th May 1951 for an independent parish at Kalyan. Meanwhile with the permission of the appropriate Sabha authorities, the first Holy Communion service in Malayalam order was celebrated by late V. Rev. P. J. Thomas of Ankola on 17th Jun, 1951 at St. Christopher Church, Kalyan. His Grace, the Late Most. Rev. Dr. Juhanon Mar Thoma Metropolitan, by a Kalpana dated 10th Aug, 1951 was pleased to accord sanction to the formation of a separate Mar Thoma parish at Kalyan and the first Holy Communion service as a parish was celebrated on Sunday, 19th Aug, 1951 at the St. Christopher’s Church, Kalyan by late V. Rev. C. G. Alexander, the then Vicar of Mumbai who was concurrently appointed Vicar of Kalyan parish also. On this occasion, we remember with gratitude, the help and guidance given by late Very Rev. C. G. Alexander, late Rev. T. M. Mathai of Kirkee-Pune, Mr. George Alexander (now Rev. George Alexander) and many members in and around Kalyan/Mumbai who gave leadership for the formation of the Kalyan parish. We continued our worship service at St. Christopher’s Church, Kalyan till Dec 1968.

As years passed by, the Marthomite community increased in number and we felt the need of having a church building of our own. We raised funds through various sources and purchased on ownership basis, our worship place at Karnik Road named Mar Thoma Centre. By 1968, this hall was ready and the first Holy Communion service was celebrated there on 12th Dec, 1968 by our present Valia Metropolitan, His Grace Most Rev. Dr. Philipose Mar Chyrsostom. This place was dedicated on 9th Feb, 1969 by His Grace Himself.

OUR NEW CHURCH AT MASOBA MAIDAN
Due to the space crunch caused by the increased strength of the parish and also to revitalize our social service projects etc., we thought of having a larger place, and for this purpose, we acquired a plot of land in Apr 1984 at Masoba Maidan. There, the foundation stone for a multipurpose building was laid on 18th Jan, 1987 by the present Metropolitan, His Grace Most Rev. Dr. Joseph Mar Thoma (the then Diocesan Bishop). With the sincere co-operation of all our members, our sister parishes, as well as friends and well wishers, the first phase i.e., the ground floor was completed and dedicated to the glory of God by His Lordship Rt. Rev. Geevarghese Mar Athanasius ( the then Diocesan Bishop) on 31st Mar, 1990. The first Holy Communion service at this church was celebrated by His Lordship himself on
Sunday, the 1st Apr, 1990.

FORMATION OF INDEPENDENT PARISHES
Because of rapid industrialization in Kalyan and its surrounding areas, the Marthomite community grew in strength. Consequently, members from the following areas formed separate parishes:

Thus, our parish earned the unique distinction of being the Mother Parish to 4 independent parishes.

Even after carving out four independent parishes from it, the Kalyan parish today has 250 subscribing member-families with a total strength of 900 (Approx.) individual members spread over Kalyan West & East/Shahad/Thakurli/Dombivli areas.

SILVER JUBILEE 1951-1976
We celebrated the Silver Jubilee on Sunday, the 12th Dec, 1976. Various religious heads, representatives of other Christian denominations, political dignitaries and social personalities were present. Our present Valia Metropolitan, His Grace Most Rev. Dr. Philipose Mar Chyrsostom was the Chief Guest on that occasion.

CHURCH GOLDEN JUBILEE 1951- 2001
The Church celebrated 2001-2002 as its Golden Jubilee year. Various projects including Goveli Project, adoption of Chettiveedu village in Chaglamari Mission Field in Andhra Pradesh, sponsorship of evangelist, marriage aid for poor girls and providing financial assistance to the needy were undertaken as part of the Golden Jubilee celebration.

To finance the various projects, a cultural programme was conducted on 27th Jan, 2001 at Central Railway School ground. The Jubilee Inaugural function was conducted by the then Diocesan Bishop Rt. Rev. Dr. Issac Mar Philoxenos Episcopa on 26th Aug, 2001.

The main programme of the Golden Jubilee celebration was held on Sunday, 9th Dec, 2001 at a public function. His Grace Most Rev. Dr. Philipose Mar Chyrsostom, the then Metropolitan was the Chief Guest on that occasion. Representatives from other churches, Vicars from various parishes and various dignitaries were present at the function. A Golden Jubilee Souvenir was also released to commemorate the occasion.

GREEN PARISH
Under the intiative of the Yuvajana Sakhyam, our parish was declared as a ‘Plastic free parish’ and ‘Green parish’ in 2008. This is truly a great step towards re-establishing our relationship with nature.

CHURCH DIAMOND JUBILEE 1951-2011
The General Body meeting held on 8th Aug, 2010 chalked out various programmes for the Diamond Jubilee year, which are:

The Jubilee inaugural function was conducted by His Lordship, Rt. Rev. Dr. Abraham Mar Paulos, the then Diocesan Episcopa on Sunday, the 15th Aug, 2010. In this meeting, Thirumeni suggested to start a Pastoral Counselling Centre. To raise funds for the various projects, we conducted a cultural programme ‘Kalasangamam’ – a mega-event of Malayalam playback singers and other artists, on Sunday, the 30th Jan, 2011 at Central Railway School ground.

EDAVAKA MISSION & SEVIKA SANGHAM GOLDEN JUBILEE 1961-2011
The Edavaka Mission and Sevika Sangham Golden Jubilees were separately inaugurated by His Lordship, Rt. Rev. Dr. Abraham Mar Paulos, our then Diocesan Episcopa. His Grace launched the one year long Golden Jubilee programs of the Edavaka Mission and Sevika Sangham, which give thrust to social service activities, immediately after the inauguration of the parish Diamond Jubilee celebrations on 15th Aug, 2010.